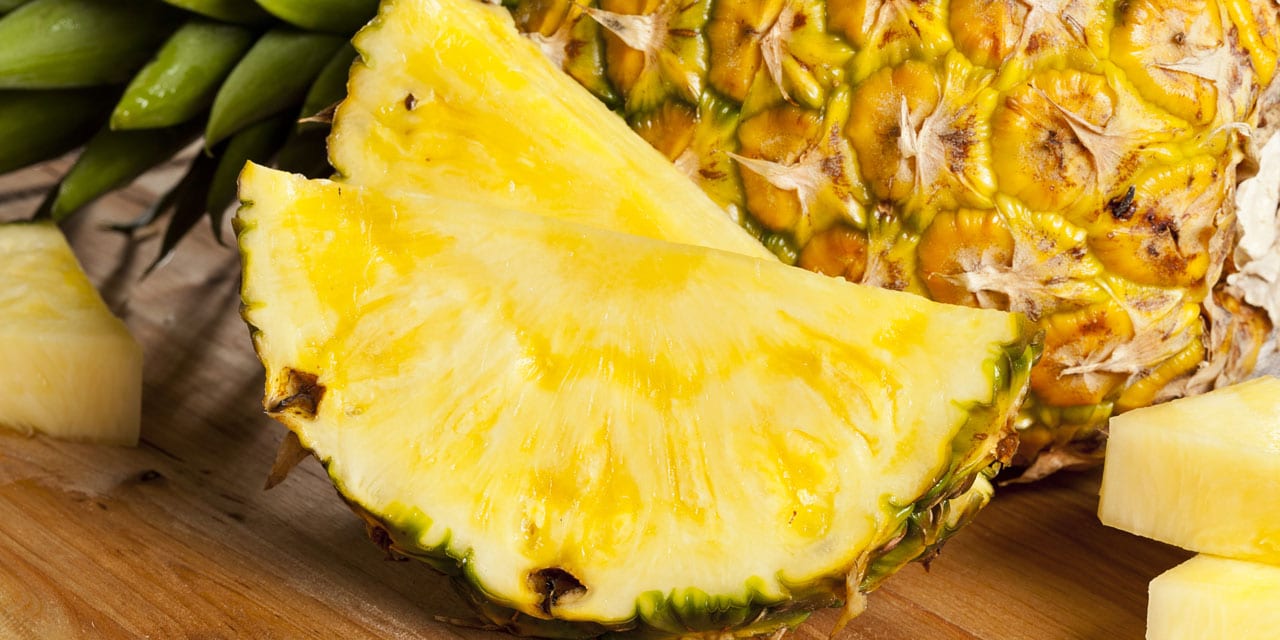 Supports digestion and fat burning.  Pineapple contains the digestive enzyme bromelain, which breaks down proteins and peptides into amino acids to aid digestion. The enzymes it contains stimulate fat burning. In addition, bromelain is very effective against intestinal parasites and worms and attacks both.

Decongestant effect.  Bromelain is also used for traumatic or postoperative swelling of the nose and sinuses thanks to its decongestant properties. Pineapple also promises relief from sports injuries and sore muscles, as the potassium it contains regulates the water balance and ensures that the muscles are given the nutrition needed to recover.

Purifying.  The potassium in pineapple also leads to a diuretic and draining effect. At the same time, the dietary fibres and the enzyme bromelain help the intestine to eliminate toxins better. It also contains vitamin C and activates a blood-cleansing enzyme in the liver.

Acid-base balance.  Due to the minerals it contains, pineapple has a strong basic effect and thus supports de-acidification of the body. People who are overly acidic often react aggressively or irritated. The alkaline effect of pineapple helps you to react calmly even in stressful situations.

Anti-inflammatory, anti-cancer and anti-infectious effect.  Due to its anti-inflammatory properties, pineapple bromelain has a positive effect in the treatment of fever and colds. Several scientific studies have also been able to show that the natural digestive enzyme bromelain from pineapple has a cancer cell-inhibiting effect on colon and breast cancer.

Micronutrients and enzymes in pineapple:

Interesting facts about the pineapple

Pineapples originally come from Paraguay and southern Brazil, but soon made their way to Central America and the West Indies. As Europeans explored the Americas, pineapples continued to spread. Christopher Columbus brought it back to Spain in 1493 on his second voyage to the New World, and in the 16th century the Portuguese spread the tropical fruit around the world. In the 18th and 19th centuries it became increasingly popular in Europe.

Pineapples were already used as a remedy by the indigenous peoples of the Caribbean and northern South America, because the enzyme bromelain it contains has an anti-inflammatory, blood-thinning and decongestant effect and supports digestion. It is said that King Ludwig II of Bavaria (1845-1886) brought his digestion back into balance with pineapple wine from the court pharmacy after a sumptuous feast.

The name pineapple is composed of naná, which means ‘fruit’ in the Guaraní language, and the Latin species epithet comosus, which means ‘tufted’ and alludes to the tuft of leaves at the upper end of the infructescence.

It belongs to the bromeliad family and is actually a false fruit. Because botanically correct, it is a fruit association of berries on a thickened infructescence axis, which have grown together. The plant has rosette-like green leaves that are up to 120 cm long with thorns, many small flowers grow from the center and berries develop from them, which over time grow together into a pineapple fruit. It takes 13 to 18 months to be ready for harvest.